[vc_row][vc_column][vc_video link="https://www.youtube.com/watch?v=7s3ebfjxlpk"][/vc_column][/vc_row][vc_row][vc_column][vc_column_text][/vc_column_text][/vc_column][/vc_row][vc_row][vc_column][vc_column_text]people obviously want to make a good living but there's more to life now than that a new study done by the direct sellers association of canada and abacus data gives insight into what seems to be becoming a new and popular way to generate some extra income for canadians people often have their traditional job nine to five job where they they make their money uh you know in a traditional sense but what we wanted to understand was are people working outside of that in what we might call the gear gig economy and if they're not do they have intentions to look at that the survey found that 31 of canadians looked at other ways to create additional income over the course of the copa 19 pandemic an obvious reason was the massive layoffs across industries but it looks like canadians also found multiple streams of income to satisfy their interests and personal aspirations people are very interested in not just from a financial perspective but also in terms of work-life balance and you know getting some satisfaction from what they do the survey also found three in five respondents intend to pursue opportunities to make additional money over the next 12 months so it was a quarantine it was a quarantine thing emmanuella started her company delectables by e-man in april 2020 just weeks after the pandemic was declared what was once just a hobby has now turned into a source of income for emmanuella alongside her job as a vaccine booker for alberta health services it's quite a bit of income into like in your pockets like along with your job so you're not like as worried about when's the next check going to come in but i don't think i want to ever stop doing it it's it's pretty cool to have and like yeah it makes you feel secure as well in the economy emanuela is 22 and a recent graduate she says it's not just her during the pandemic many of her friends also started businesses some have even quit their jobs due to the success of their side hustles this reflects in the dsa analysis which states over 70 percent of the respondents were in the 18 to 29 age group and what we find is a lot of people now it's not you don't start a job when you're 18 and won't work till you're 65 so particularly younger people might do three or four different things that make up a full a full set of earnings for a week in calgary christy kilburn city news<br><!-- wp:image {"id":1776,"sizeSlug":"large","linkDestination":"none"} -->rn<figure class="wp-block-image size-large"><img class="wp-image-1776" src="https://en.videoencontexto.com/wp-content/uploads/2021/10/New_study_shows_more_Canadians_found_side_hustles_during_the_pandemic_7s3ebfjxlpk.jpg" alt="New study shows more Canadians found side hustles during the pandemic" /></figure>rn<!-- /wp:image -->[/vc_column_text][/vc_column][/vc_row] 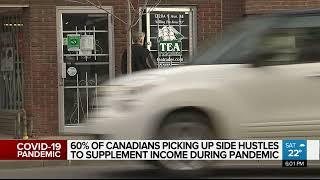