[vc_row][vc_column][vc_video link="https://www.youtube.com/watch?v=qazc4XhZ-hE"][/vc_column][/vc_row][vc_row][vc_column][vc_column_text][/vc_column_text][/vc_column][/vc_row][vc_row][vc_column][vc_column_text]&gt;&gt; Joe, what kind of insight can youngive us into your expectations not only as NXT champion but also fornthe future of the NXT brand. &gt;&gt; It would cross my expectationsnI think they're a bit unexpected. I think most people think mynexpectation would lie and domination of the competition terrorizing my opponentsnwill those things go without saying. But really my expectations lie innthe reestablishing of a precedent of what it means to be an NXT champion, ornwhat it means to be a standard bearer. A man who walks forward and representsnhimself in the utmost fashion and all aspects of what we do. This began far before I everncaptured this championship. It started the week going into the fight. It wasn't spent with the luxurynof having a nice camp of being relaxed of going into thisnevent 100% fully ready to go. No, I wasn't afforded that luxury. I was in Las Vegas, holding tryoutsnfinding the next superstar. The next superstar to secure the future ofnNXT and then from there into the summer Slam weakened red eye flightnstraight back to here. No sleep, jet lagged,ndying to see my family but the precedent demands that mynattention be focused here. Because the mission needednto be accomplished, I needed to capturenthe NXT Championship and I needed to capture the NXT Championship,nbecause the precedent needs to be set. &gt;&gt; We'll set a precedent you did and with that being said this is a recordnbreaking third reign as NXT champion, with this being a third reign, has thatnchanged your perspective on anything? &gt;&gt; It has this being my thirdnreign with the NXT Championship, it's taught me one thingnthat legacies important. The men who carried thisnchampionship before me, their legacy was important when men likenShinsuke Nakamura men like Finn Balor and now I need to carry on this legacy. I need to carry on this precedent thatnI spoke of whether it be in the media, whether it be in front of fans, whethernit be in my everyday communication, how I represent myself to the world. This now will be what it takesnto be a champion at NXT. The path that I pavednwhat I show the world, this is the way to championship goes. So now this all lies innthe hands of those around me. Who amongst fantasy Russia is gonnanstep up who amongst them is gonna brave the wilds of coming at mentrying to seize their destiny. These are the questionsnthat need to be answered. And trust me, I'm more than happynto help them find those answers.<br><!-- wp:image {"id":1776,"sizeSlug":"large","linkDestination":"none"} -->rn<figure class="wp-block-image size-large"><img class="wp-image-1776" src="https://en.videoencontexto.com/wp-content/uploads/2021/10/Samoa_Joe_challenges_all_upandcomers_to_seize_their_opportunity_WWE_NXT_Aug_31_2_qazc4XhZ-hE.jpg" alt="Samoa Joe challenges all up-and-comers to seize their opportunity: WWE NXT, Aug. 31, 2021" /></figure>rn<!-- /wp:image -->[/vc_column_text][/vc_column][/vc_row] 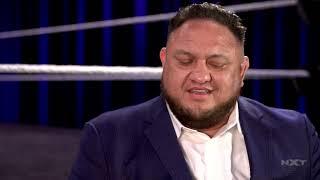